Associated Press has just published an article on Matt Chandler‘s progress and response to his brain cancer.

Also, Mark Driscoll has a link on his website to another article about Matt.

My mother introduced me to this video and I think it was funnier watching her reaction. I posted this for you, Mom!

My sweet little boy is home recovering from surgery. What a trooper he has been! We arose early Thursday morning to have him to the hospital by 5:30 AM for surgery that was scheduled at 7:30 AM. 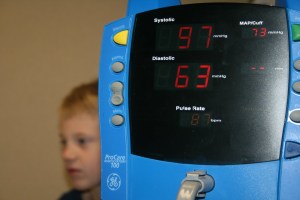 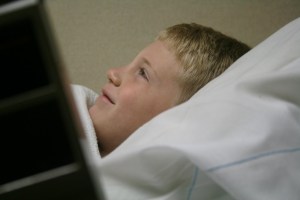 We passed the time by watching a little television and playing Hi Ho Cheerio.

Mitch’s parents joined us right before Andrew was wheeled into the operating room so it was a special time to surround him with faces he loved. His surgery actually started ten minutes early but lasted longer than we had originally thought. He was back into his private room around 9:20AM and, after Pop prayed for his recovery and healing, Andrew slept the rest of the day. His pain has been minimal, thanks to Tylenol with Codeine. 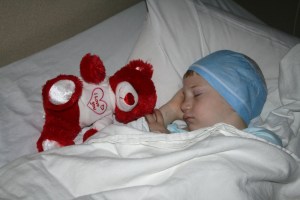 This is where Andrew stays all day, except to rise to go the restroom. We take his bandages off tomorrow….I hear screams a’comin’.

I am so thankful my mother was here during this time. Her being here has allowed me to come and go with our other two children, make a grocery stop, take a brief walk alone, and not cook! She has invaded my house with her amazing cleaning and organization skills so I now have order in my kitchen drawers, folded and sorted clothes in the boys’ dressers, and totally clean and folded laundry!!!! Do you know the last time I had all the laundry clean, folded AND put away?!? I can’t either.
Luke is doing better after his root canal and is taking the antibiotic like it’s candy. I, however came down with a stomach bug this afternoon as I was at the park with the two little ones. Exhausted, I laid down with Andrew early evening and we slept for four hours, hence why I’m up at 2:30 typing this post. Also, Mitch has hurt his back so he is sleeping the night away with pain meds. Except for Abigail, we are all a bunch of sick folks!
I have purposefully not been too specific about the type of surgery he had but it had to do with his male parts so it might be helpful not to ask him too many details about the incisions, etc. HA!
Standard

Amazing time lapse video of US Airways Flight 1549 as it lay in wait in the Hudson River.

Posted on Kontain.com – [Flight 1549] from David Martin on Vimeo.

I know that it’s been quite a while

since my fingers typed a post.
But these past few days have been a blur
So it’s my bed I’m wanting most.
Standard 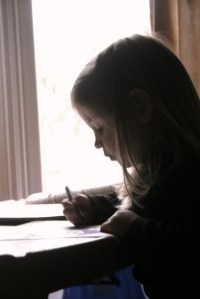 Today was a busy day!

First, Mitch took the boys to Lowe’s for the Build & Grow workshop (we’ve only attended Home Depot’s workshops in the past) where they made a Tic-Tac-Toe game by hammering the box ends together to form a casing for the game pieces. I think the boys really enjoy this hammer pounding each month but I think the biggest highlight of that time is getting to be with their Daddy.
I know Luke looks angry (?) and/or sad (?) in this picture….can’t tell you why. He’s never been fond of the camera.

Following the time of heavy construction, our family drove 30 miles north to meet up with my brother and sister-in-law at Callaway Gardens (admission is free through the end of February) where we had a picnic, walked Einstein (their dog), fed ducks, and visited the Butterfly Center. It was far colder than what we expected so we didn’t stay at the gardens for long. 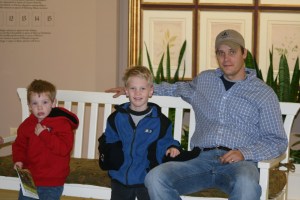 Next, I took my brother and SIL to The National Infantry Museum that’s located in our town (where admission is ALWAYS free!). I’ve been to this museum four times and I must say that I enjoy it more and more each time I visit. I’ve still not read every plaque on the wall or caption under every photo but it was neat to be there with my brother, a former Marine (I know that different than Army, ok?) because I knew he would have a true sense of appreciation for the sacrifice military men make.

My beautiful sister-in-law is pregnant and I suspect she played the role of “good sport” today since she NEVER complained of nausea or dizziness. I had a feeling, though, that she didn’t feel so swell as we walked the garden paths and museum hallways. Thanks, Kristi, for loving me, loving my children, loving my brother, and loving your extended family! I’m so thankful for you and for the time we shared today. I’m so glad y’all drove down, ate steak with us, brought Einstein, and took that leather recliner out of our garage!

The McGinnis Message
Create a free website or blog at WordPress.com.